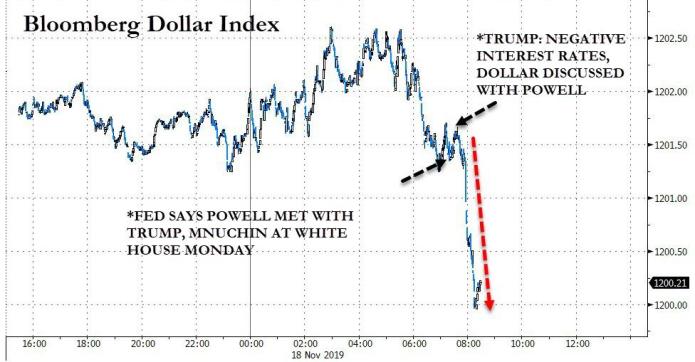 Moments ago, the Fed announced that in a previously unannounced meeting that was not on the official White House calendar, Fed Chair Powell met with Trump and Mnuchin at the White House “to discuss the economy, growth, employment and inflation”, marking the second face-to-face meeting between the world’s two most powerful people amid Trump’s relentless criticism of the central bank. As a reminder, Powell had dinner with the president in February and the two have spoken since by telephone since.The Fed’s boilerplate statement was followed by another, with the Fed noting that “Powell’s comments were consistent with his remarks at his congressional hearings last week. He did not discuss his expectations for monetary policy, except to stress that the path of policy will depend entirely on incoming information that bears on the outlook for the economy.”What is notable is the Fed’s addition that “Powell said that he and his colleagues on the Federal Open Market Committee will set monetary policy, as required by law, to support maximum employment and stable prices and will make those decisions based solely on careful, objective and non-political analysis.”As CNBC points out, the fed’s language here – and that the Fed is first to disclose the meeting – will be seen as a brush back pitch by Powell to President Trump. The full statement is below: