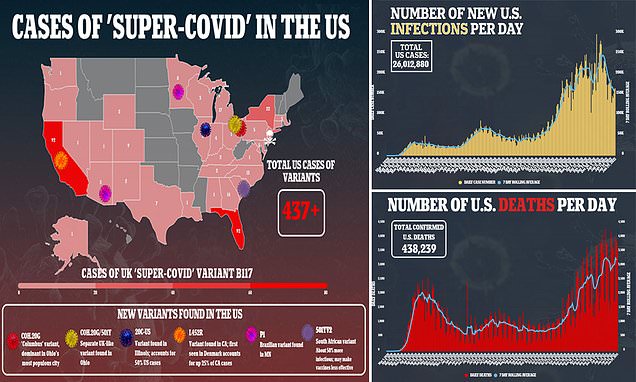 Maryland Gov. Larry Hogan announced Saturday a case of the new B.1.351 variant in a woman from Baltimore This marks the state’s first case of the South African variant and the third on US soilThe woman had no recent travel history overseas, sparking concerns the strain is already spreadingThe case comes just two days after two South Carolina residents became the first Americans found to have contracted the South African strainThere is no evidence the new strain is more deadly but it is feared to make the vaccine less effective The US topped 26 million cases Saturday and the death toll reached 438,239 More than 166,000 new cases were recorded in the last 24 hours and more than 3,600 people died Hard-hit California marked a grim record Saturday morning as it topped 40,000 deathsThe CDC issued an order late Friday that masks must be worn on all public transport nationwide